Very early this morning, I returned from Phoenix where I spent a few days with my parents.  My father’s 83rd birthday was last Thursday and I flew down to celebrate with him. Happy Birthday Dad!!

For his birthday, I made him a quilt to use when he is sitting in his recliner and/or sleeping.  Because he really likes eagles, I purchased two different fabric panels from Amazon and incorporated the printed eagle pictures into a pieced quilt. The other fabrics were pieces I already had in my fabric stash. 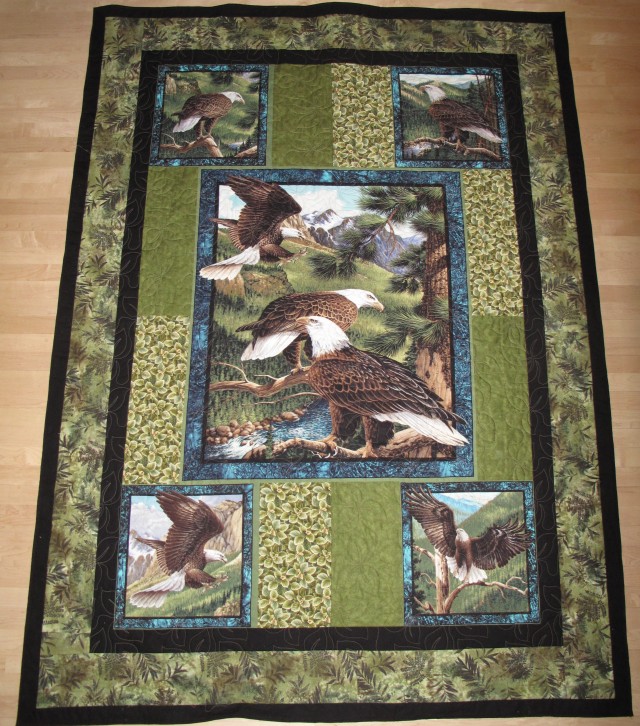 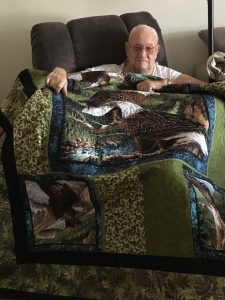 By using panels, this was a really quick quilt to make.  I think I spent a total of 12 hours cutting, piecing, quilting and binding the quilt.  That’s certainly a lot quicker than most of the quilts I make!

To celebrate his birthday, we went to Thee Pitts Again in Glendale, AZ.  This restaurant has been featured on Diners, Drive-Ins and Dives and is well known for their tasty BBQ.

When planning my trip, I was looking forward to some warm, sunny weather in Arizona.  Unfortunately, that wasn’t the case.  The news headlines while I was visiting my parents was all about the record levels of snowfall throughout the state of Arizona. While no snow fell in Glendale, where my parents live, it did rain almost the entire time I was there.

Poor weather seems to like to create havoc with my recent travels. My departure on Wednesday fell on the day of a snow storm.  All of the schools in the Twin Cities were closed that day due to the storm.  After working in the morning, I went straight to the airport, only to find out that my flight was delayed by about two hours due to the weather.  Again last night, my return flight was during a snow storm with another two hour delay.

Both of these were better than the flight I took to Tampa two weeks ago.  My departure flight for that trip also fell on the day of a major snow storm.  That time I was delay five hours.

Dealing with weather delays in an airport calls for creative ways to help pass the time.  Waiting for my flight to Tampa, I was sitting near the gate working on a hat.  Knitting was a good way to fill the time, but when another major flight was posted, I realized that I  needed to move around rather than sit for so long. So, I set out on a challenge to discovered the distance that a person could  walk in Terminal 1 of the MSP airport.  Utilizing my Fitbit, I discovered that if a person walks to each gate of all of the concourses (A-G) it involves 11,266 steps (4.6 miles) and takes  two hours and 15 minutes.

This was a great way to fill the time and do some people watching.  And, until setting out on my walk, I had never been to Concourses A or B. Now I know where they are if I ever need to quickly get to one of their gates.

On Wednesday, learning that my flight was once again delayed, I completed my walking circuit again.  This time my goal was to try to walk faster  – kinda hard to do in a crowded, busy, snow-delayed airport.  I did, however, successfully reduced the time to 1 hour, 45 minutes.

Last night, being delayed yet again, I decided to do the same thing at the Phoenix airport.  Starting at gate A30, walking to the end of each concourse, and returning to gate A30 required 6,951 steps (2.8 miles) and took just over an hour to complete.  Terminal 4 of the PHX airport is definately smaller than Terminal 1 at MSP.

I may have started a new challenge for my self!  Whenever I am in an airport for longer than two hours, I think I will set out to measure the airport walking distance.

One thought on “Birthdays, Weather and Walks”